Blast of the Dragon’s Fury by LRW Lee is one of my latest reads. I found the book through the Independent Author Network and I loved the cover and the blurb sounded like my kind of book. Read on to see what I thought! 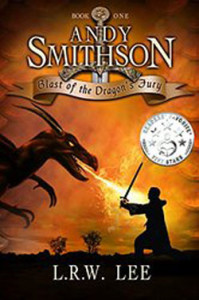 Synopsis (from the author): Ten-year-old Andy Smithson believes he is merely a kid too often in trouble with his overambitious parents–until his destiny as the Chosen One to break a 500-year-old curse is revealed. Swept away to the land of Oomaldee of medieval times, he discovers he must collect several ingredients for a magic potion to defeat the oppressive curse that plagues the land, the first of which is the scale of a red dragon, the fiercest of all dragon species. There’s just one tiny problem, he’s never battled dragons, except in his Dragon Slayer video game. Armed with only his wits, an ancient sword and a magic key, he must overcome grave peril at every turn before he can even attempt the feat. No pressure, but it’s his skill alone that will save – or condemn – the kingdom forever.

What I liked: This book, the first in a series, is a unique twist on the hero tale. The hero, in this case, is a ten-year-old boy who is transported to a kingdom that is under a curse. Andy is a good character, and fits the typical kid profile. His parents are both CEOs, so he feels neglected. The king – who wears jeans and t-shirts – was an interesting take on the ruler who needs help, and Mermin (Merlin’s brother) is a bumbling sort of wizard. My favorite character was Alden, the servant boy who befriends Andy and shares his adventures. The story moves along nicely, with action appropriate to the age group. The book entertained me with its humor and was a good read!

What I didn’t like: The one complaint I have is that the King doesn’t reveal what caused the curse or why Andy must be the one to break it. I realize the story will be revealed later in the series, but a little more information would have helped!

Overall impression: The first book of the Andy Smithson series, Blast of the Dragon’s Fury is a good middle grade and above read. It’s entertaining enough for adults, and younger readers will enjoy the unique use of cow farts! Full of humor, adventure, magic, and heroes, the story flowed nicely and kept me entertained! I will add the rest of the series to my TBR list!!

Connect with the author:

If you read Blast of the Dragon’s Fury by L.R.W. Lee, please consider leaving a review! And connect with L.R.W. Lee on her site at LRWLee.com!

Want to leave a comment on my review? Please do! I love to hear from readers! If you want to connect with me, find me on Twitter, Facebook, Goodreads, Google+, or Tumblr. You can also email me at bill@williamlstuart.com. If you don’t want to miss a post, subscribe to the blog!

This site uses Akismet to reduce spam. Learn how your comment data is processed.