One of the main characters in The Gemstone Chronicles is Beebop, grandfather of Aidan and Maggie and husband to Nana. In the books, Beebop is a US Navy submarine veteran. News flash! So am I!!

Okay, I admit it. I borrowed some of my own experiences as a nuclear trained electronics technician for Beebop’s character. In a tribute to him and to submarine sailors everywhere, I thought I would do a post about the US Navy’s submarine force and my old boat, a Sturgeon Class fast attack, the USS Sandlance (SSN660)!

We used to wear ball caps like this instead of the “dixie cups” that people often associate with sailors. Ball caps were much more comfortable!! Note the silver dolphins for the enlisted sailors. Officers wore similar ball caps, but their dolphins were gold. 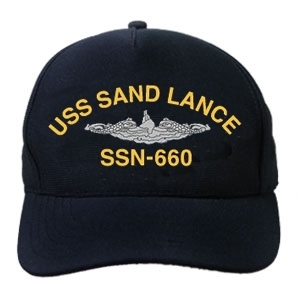 My lovely and adorable bride (who was the inspiration for Nana in the books) gave me this drawing of my old boat as a present. Hand drawn by the artist, I got the first of 100 originals! Please forgive the quality of the photos.

For those who don’t know about Naval traditions, there are a number of places where sailors become members of somewhat exclusive clubs. For instance, when you cross the Equator for the first time, you transition from a Pollywog to a Shellback. When you cross the International Date Line, you become a member of the Realm of The Golden Dragon. I never got to experience either of those while on the boat (although I have crossed both on airplanes), but I did get to something that is a bit more rare. The USS Sandlance did under ice operations and we crossed the Arctic Circle. That makes me a Blue Nose!! Below is my official Blue Nose Certificate.

Submarine sailors are a different breed. They have to be able to handle being underwater for extended periods of time, with little to no communication with the outside world. They exist in a hostile environment where the hungry sea wants to crush the boat, where sonar (an inexact science) is the eyes and ears of the submarine, and nuclear energy provides the power and the ability to remain submerged. Sub sailors make their own water, oxygen, and, as long as there is food, can simply stay at sea. The friendships made on the boat can last a lifetime – even if separated by years and distance.

I spent 3 and a half years aboard USS Sandlance before departing for recruiting duty. I earned my Dolphins (Submarine Qualification Pin), got my Blue Nose Certificate, and learned that when the lights go out underway, it becomes so dark that it is disorienting. While I can’t say that I miss the boat (and that unique boat smell that can only be gotten rid of by using Gain detergent) , I do miss the people!

This last picture is me in 1989 when I reported to Naval Recruiting District Atlanta for recruiting duty. Note that I am wearing my Dolphins and my “rookie cookie” recruiting badge. 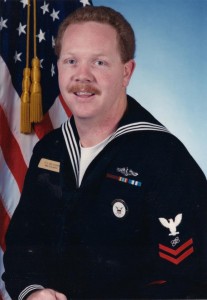 So, there you have a quick tour of my time – and the fictitious Beebop’s – time in the Navy. I didn’t dwell on the time I spent going to electronics school or Nuclear Power School in Orlando and Idaho, mostly because it was academic and boring.

Are you a sub veteran or know someone who is? If so, leave me a comment about your time on your boat. I would love to hear about your experiences!!

This site uses Akismet to reduce spam. Learn how your comment data is processed.